This post walks through an exploratory k-means clustering analysis as applied to numerical data from a dot probe task. Steps to preprocess and analyze the data are discussed and the results are presented through visualizations, as well as a discussion of the results. All code used in the analysis and in the production of this blog post is available at https://github.com/kdestasio/hc_analysis. For additional resources on clustering, see the references section at the bottom of the post.

The purpose of this analysis is to explore whether meaningful subgroups emerge from performance on an anxiety dot probe (Bar-Haim, Lamy, Pergamin, Bakermans-Kranenburg, & Van Ijzendoorn, 2007; Mathews & Mackintosh, 1998). To conduct this exploratory analysis, we use several clustering algorithms (see Jain, 2010 for an overview of clustering). Clustering algorithms are designed to group data based on their similarity or dissimilarity (e.g. distance in euclidian space). Prior to clustering, dimension reduction is conducted via principal components analysis to decresase overfitting and to make the models more inerpretable (Zha, et al., 2002; Ding & He, 2004). The final solution is selected based on visual inspection of the cluster outcomes, and based on the sum of squared errors for each solution. Outcomes of a spectral clustering analysis (connectivity), a k-means cluster analysis (compactness), and a hierarchical clustering analysis are compared to identify subgroups within the Anxiety Dot Probe measures. These approaches are well suited to numeric data. K-means is a partition based clustering algorithm that groups data points by their euclidian distance from the cluster’s centroid, the mean of that cluster’s objects (Nerurkar et al., 2018). Spectral clustering also uses euclidian distance to group data points, but by representing the data as a similarity graph in which data poionts are nodes and the distances between them are weighted edges (Von Luxburg, 2007). Both k-means and spectral clustering require a priori specification of the number of clusters. Hierarchical clustering, in contrast, creates multiple levels of clusters and subclusters (Cichosz, 2015). As such, hierarchical clustering does not require a priori specification of number of clusters.

The data are from the first dot probe in a larger, multiwave study by Dr. Tracy Dennis-Tiwary and colleagues (see Figure 1 for a visual of the entire study design). Several different performance measures are calculated for the dot probe to measure bias toward and away from threatening stimuli. The variables used in the clustering analysis are listed below. 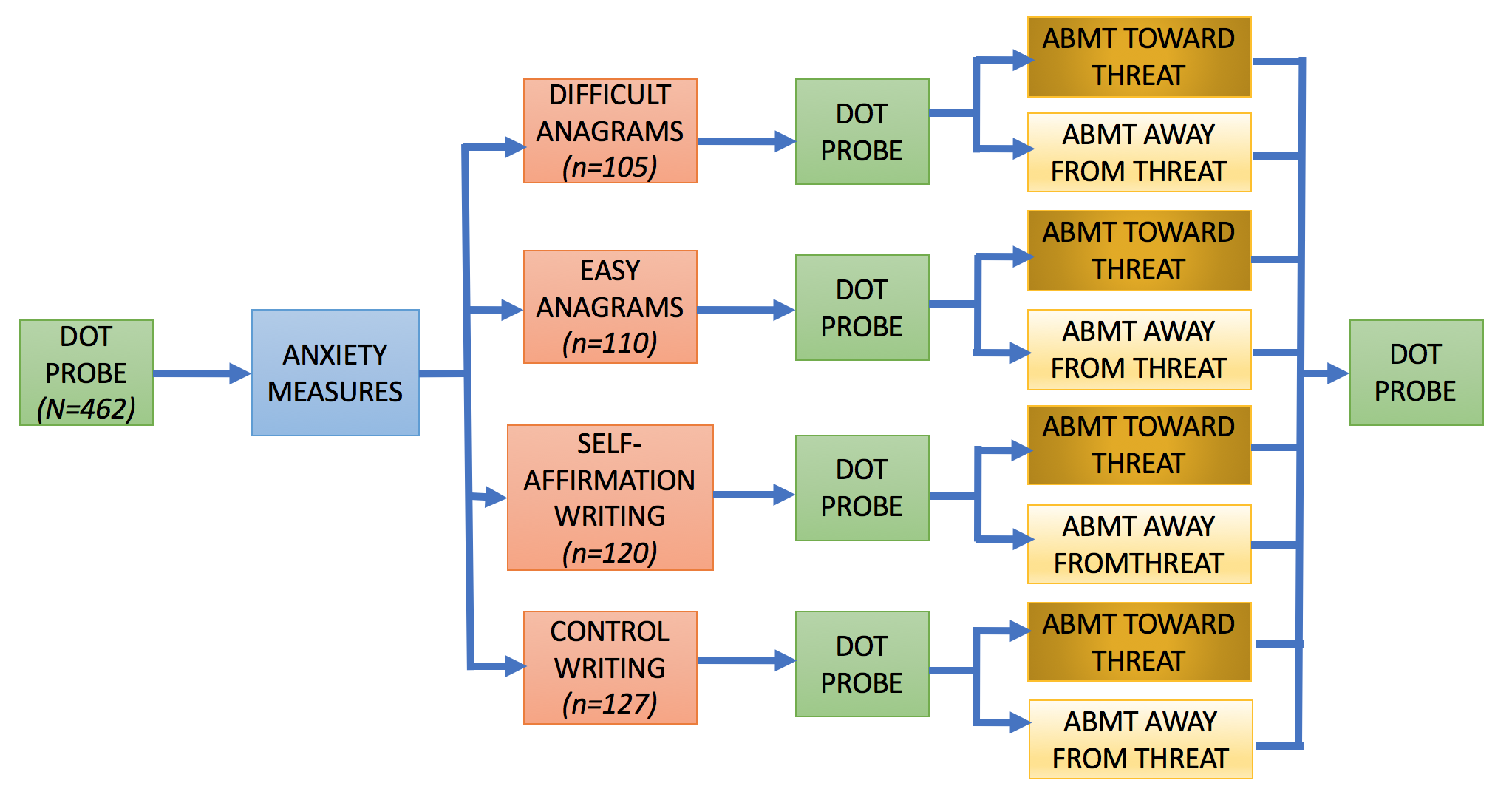 Variables included in the analysis

Outliers were already removed from the data by our collaborators based on the percentage of trials that were answered correctly. Participants with an accuracy of .80 or greater are included in the dataset. There are no initial missing data for the dot probe measures as the included metrics can be computed for anyone who completed the task.

Zero and near zero variance

All variables were checked for zero or near zero variance and no issues were found.

Purpose: Allow comparison of data that was collected on different scales.

Clustering is sensitive to differences in the measurement scales of data (Mohamad, Usman, 2013). Since the means and standard deviations do vary across features, we standardized them by mean centering Using the scale() function (see Table 1). Variables are scaled to mean = 0, sd = 1.

Purpose: prevent overfitting of the data and improve interpretability

Principal Components Analysis (PCA) is a dimensionality reduction technique that can be used as a precursor to k-means clustering (Zha, et al., 2002; Ding & He, 2004). PCA projects high dimensional data onto a lower dimensional sub-space and rotates data to mazimize variance in the new axes. The components are then listed in order of decreasing variance (e.g. component 1 has the most variation in the data, component 2 is orthogonal to component 1 and has the most remaining variation, and so on). PCA is an unsuprevised technique that can be used when we do not have hypotheses about the distribution of varaince across features. 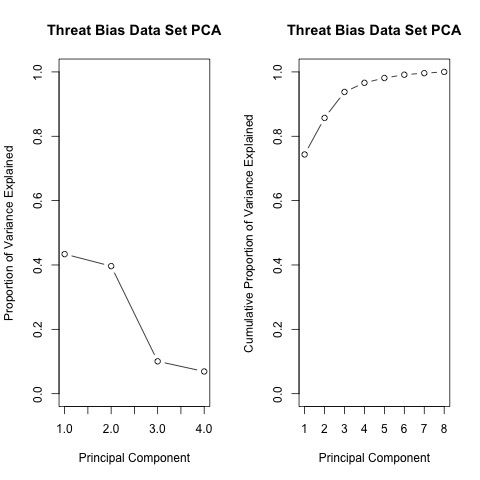 Based on the cumulative proportion of variance accounted for by each principal component, the 3-component solution is selected for use in the clustering analysis as it is the point at which more than 90% of the variance in the data can be acounted for (see Table 2).

K-means is a centroid based clustering approach that groups data points around a central point to minimize within group distance and maximize between group distance. To help determine the number of clusters to use, k-means is run with 2 through 4 clusters.

Scatterplots of clustering by variable 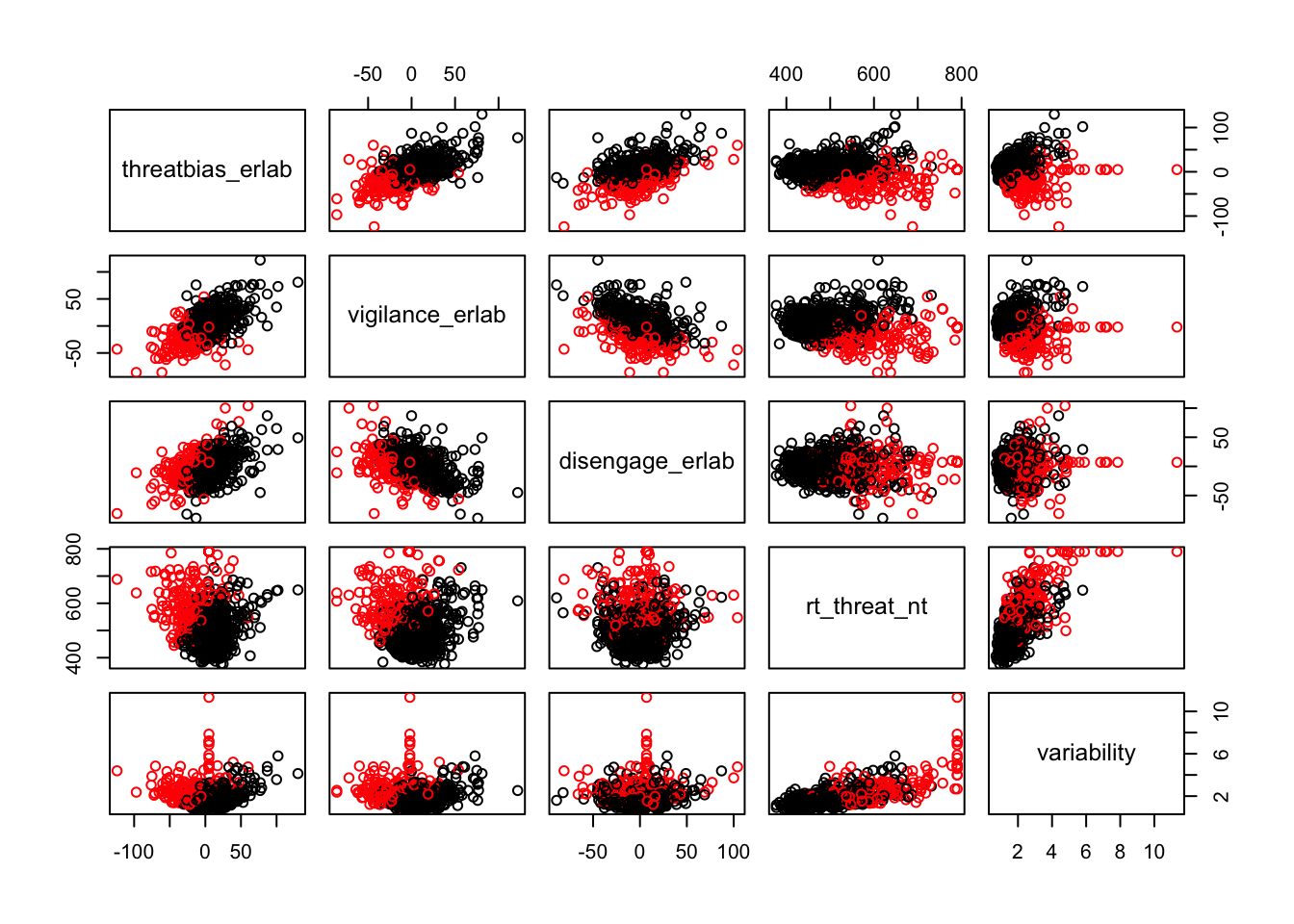 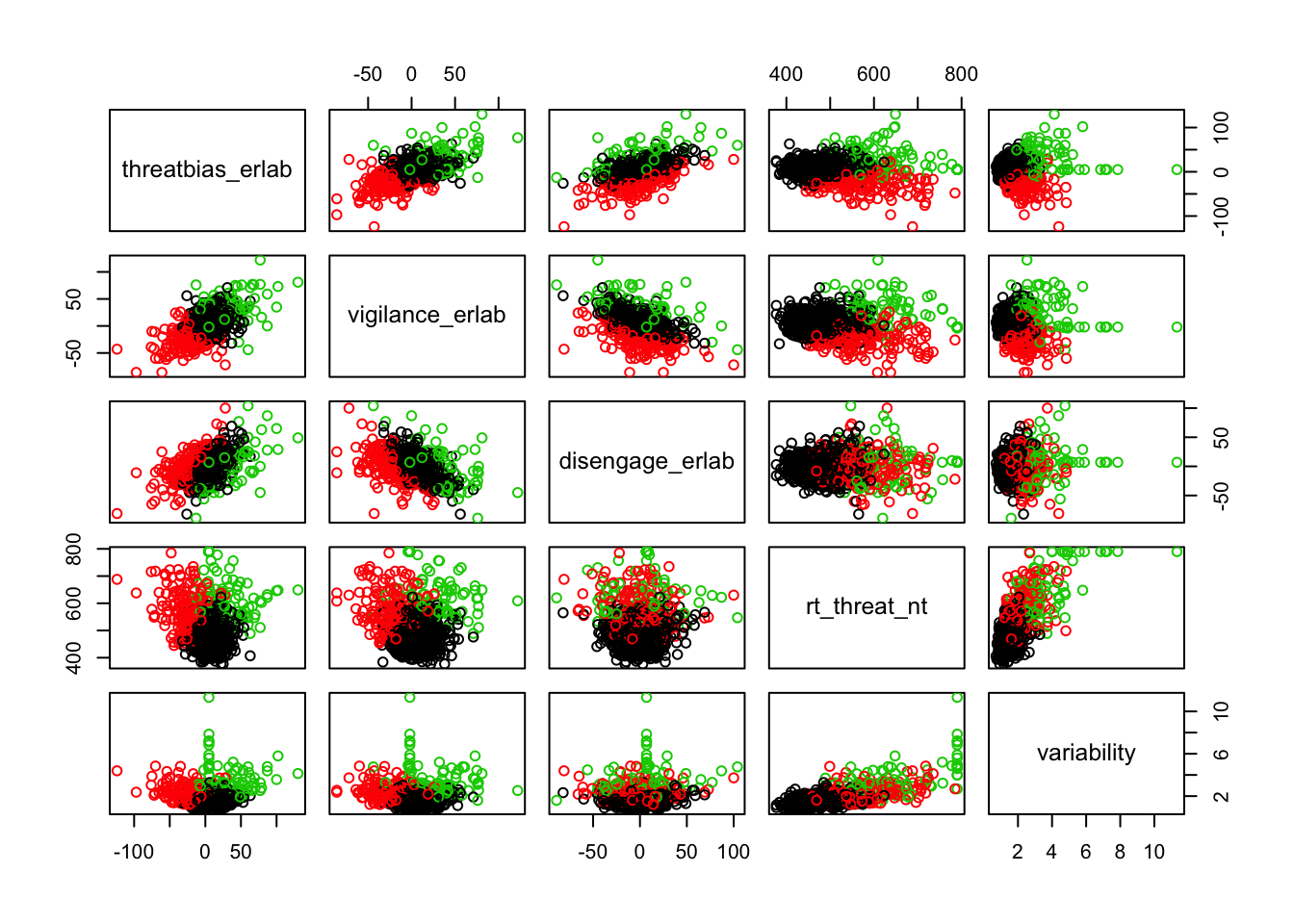 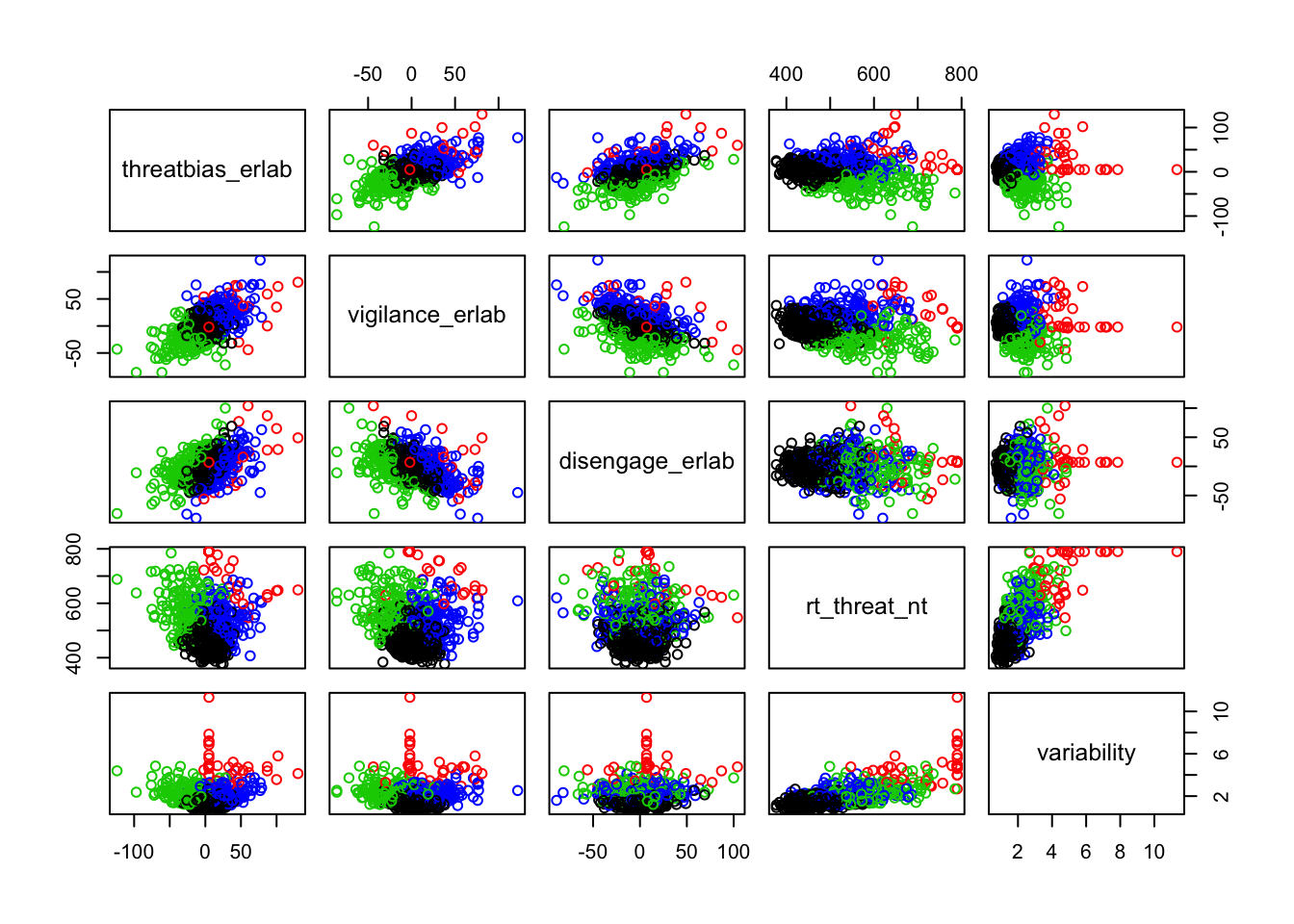 A silhouette plot shows cluster distance, a combination of within cluster compactness and of between cluster separation. A silhouette coefficient closer to 1 means that the data are well classified, whereas a coefficient near 0 means observations are between clusters. A negative silhouette coefficient means observations are likely misclassified and that the data do not group well with any of the identified clusters. The width of each cluster in this plot represents the number of observations per cluster. Generally, we want clusters to be of roughly the same size, which we can gain information about by examining the silhouette plot. 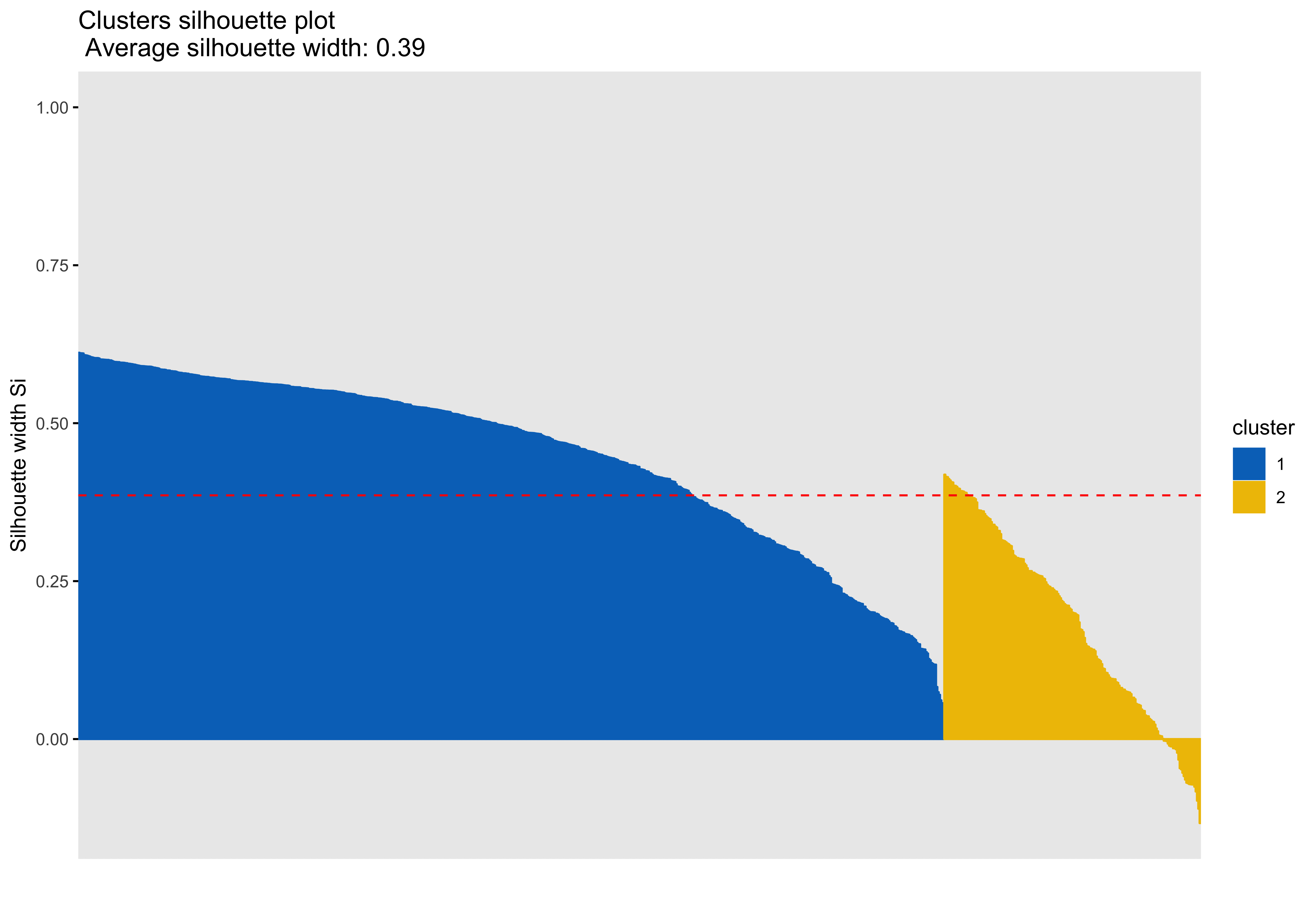 Looking at cluster 2, we see that there are observations with a negative silhouette. This suggests that, while those observations are most similar to other observations in the cluster 2 as compared to cluster 1, they are different enough from the other cluster 2 observations that they don’t really belong there. This could happen if, for example, there was a third cluster that we had not identified that could neatly absorb the misclassified observations. However, based on examination of the scatterplots and the sillhouette plots with 3 and 4 clusters, it seems that in our case this may be due to a lack of underlying structure in the data that lends itself naturally to clusters. 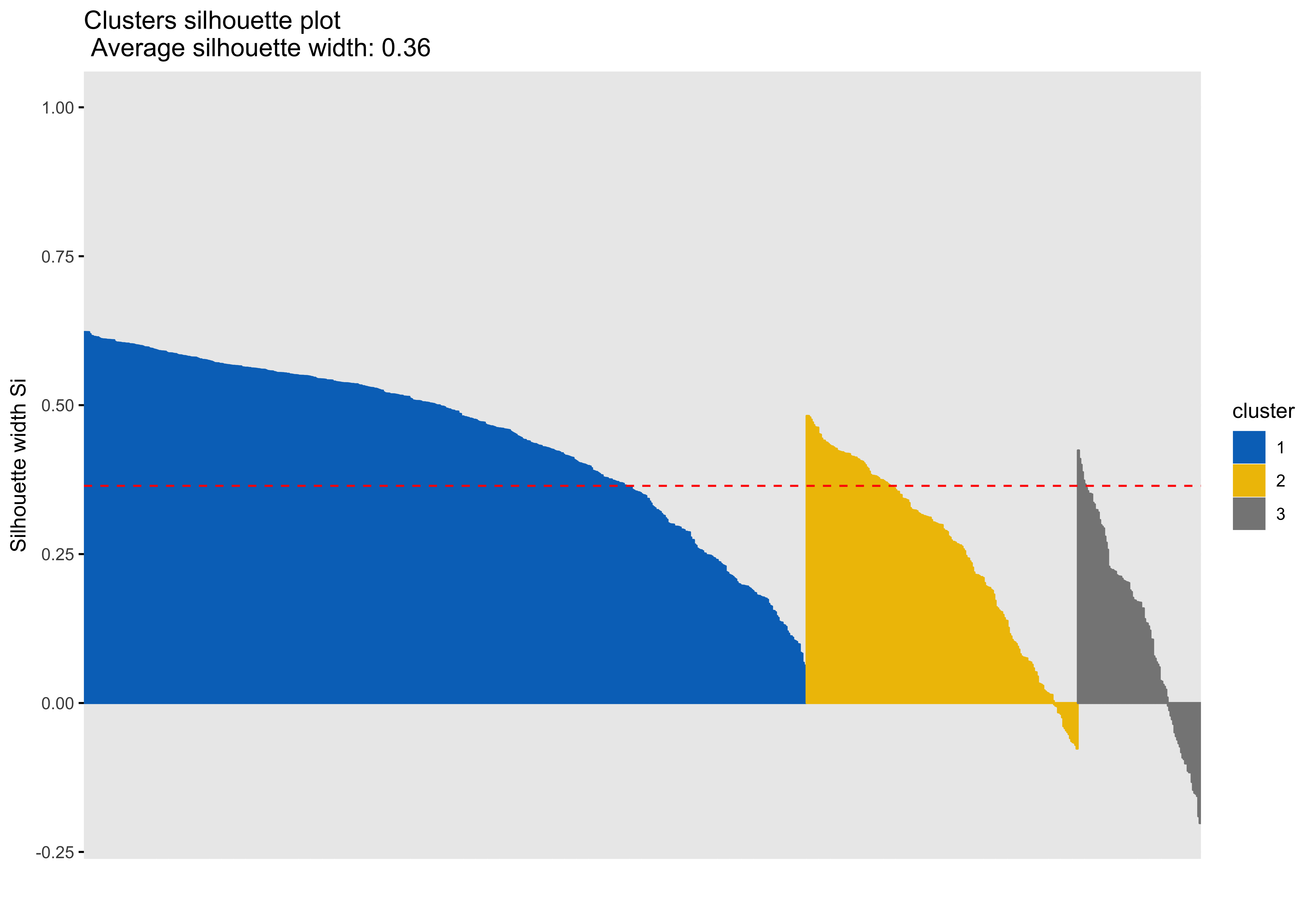 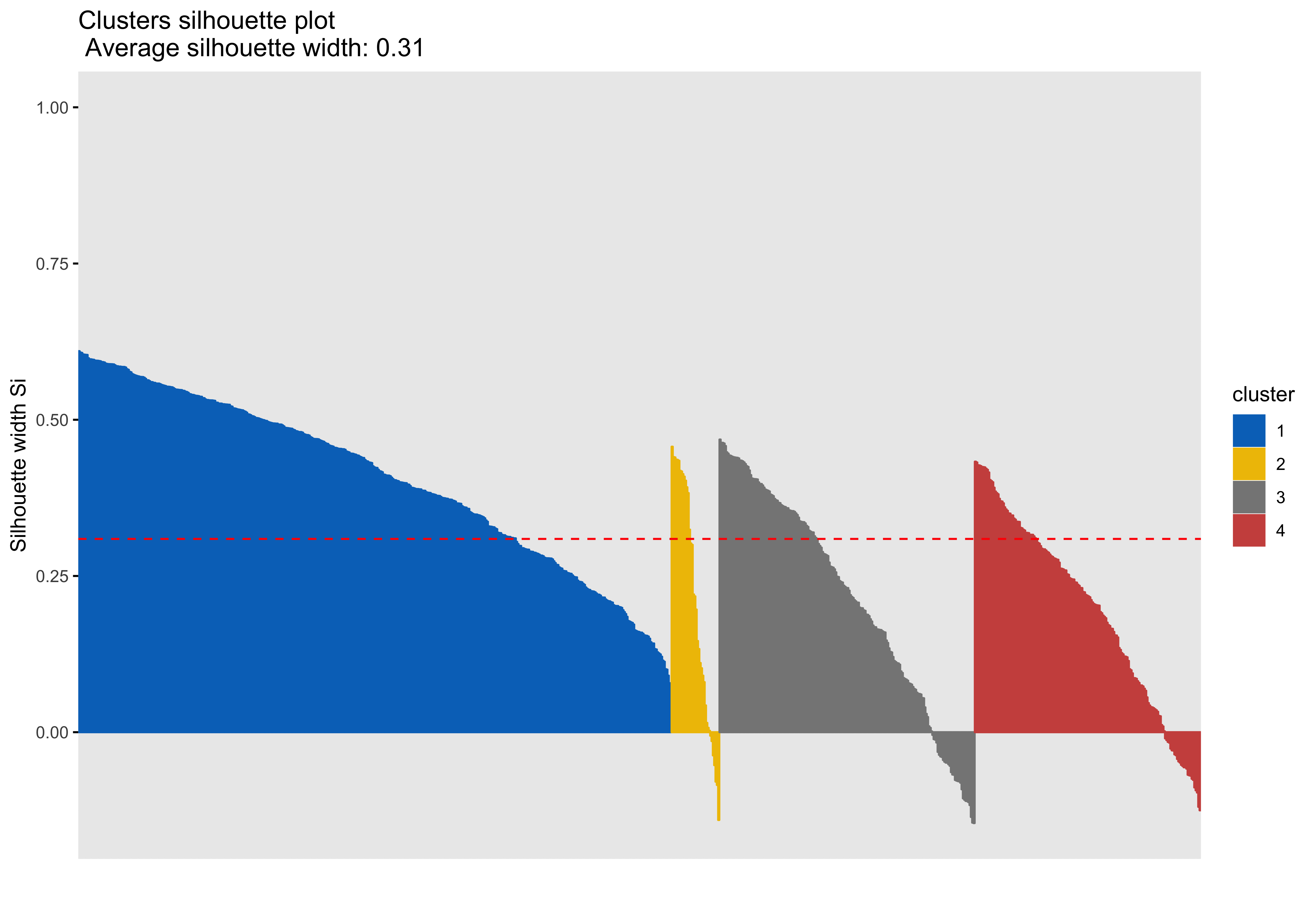 We can break the clusters down by variable as well to see how scores on each variable effect cluster membership. Looking at the median values and the spread of the data, it appears that reaction time probably contributes most strongly to cluster formation. However, the relationships between the variables are also involved in identifying the clusters, so the inferences we can draw from these plots are minimal. They can, however, be helpful in trying to make sense of clusters once they are formed. 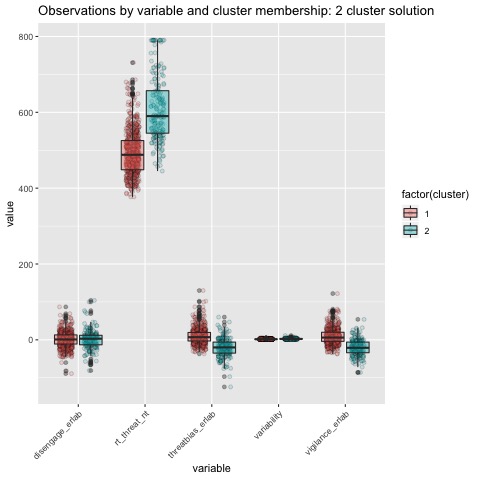 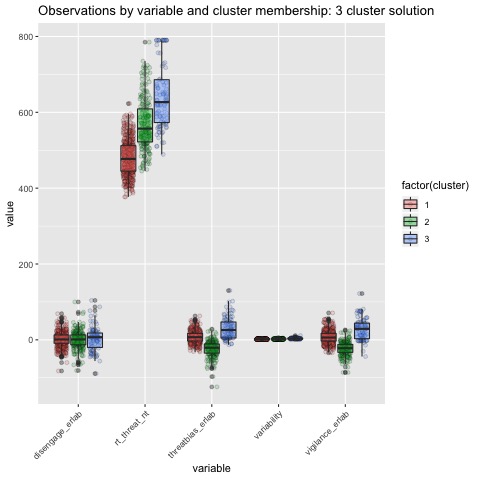 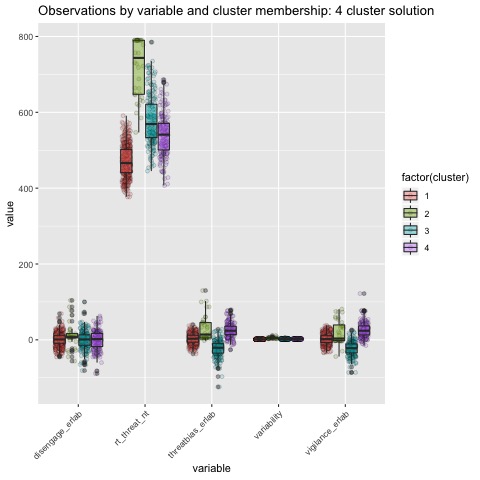 The clustering analysis was performed using the threat bias variables Threat Bias and Vigilance, as well as the response time variable Threat RT and the variability variable Variability. As mentioned in the preprocessing section, Disengagem does not provide useful information for development of a clustering solution, nor its interpretation as the variable is a linear combination of Threat Bias and Vigilance. Response time is the predominent feature on which data are clustered.

This fun clustering application that will let you play with some pokemon data and kmeans clustering: https://kdestasio.shinyapps.io/fpr_final_project/